There is something refreshing about the changing of seasons, and in particular, I love Autumn.

This Jim Davis Garfield cartoon perfectly captures why the season is especially magical. The colors, the crisp morning air, and yes, the potato-chip-like leaves.

END_OF_DOCUMENT_TOKEN_TO_BE_REPLACED 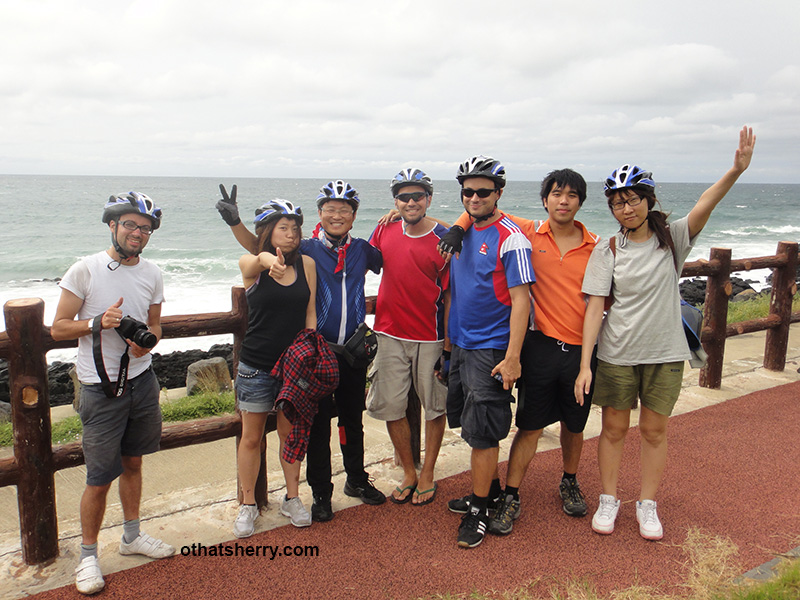 END_OF_DOCUMENT_TOKEN_TO_BE_REPLACED

The thing about abandoning everything and living in a foreign country where all aspects of it — language, culture, custom, are unfamiliar, is shocking easy. Back in 2010, I was a newly grad fresh out of college who didn’t want her fun to end, and my decision to work in Korea was a no- brainer. With my airfares and apartment paid for, I figured that the year abroad would be a party.

It was, in a way, but it was definitely not what I had expected.

“Hello, I am Sherry Teacher”

I had envisioned myself teaching at an all boys high school in the heart of Seoul, sort of a teacher by day, glam girl by night kind of deal. In reality, I taught ALL-GIRLS high school and lived in SSangmun, a suburb that has more traditional rice cake (떡) shops than bars. Another aspect that I had failed to taken into consideration was: “Koreans speak Korean, not English.” Now this may seem obvious, but I had honestly believed that because Seoul is an international metropolis, I could survive with just “안녕하세요” (“Hello”).

END_OF_DOCUMENT_TOKEN_TO_BE_REPLACED

I lived and worked in Seoul, Korea, from 2010 to 2011. Just to clarify, I am not, nor do I speak, Korean. Furthermore, I had no particular interest in Korean dramas or pop stars. Hence, you might ask, “Why did you go to Korea?”

Frankly, I do not not know myself.  But I can most certainly retort with a “Why not?”. In Alastair Reid’s poem, “Curiosity,” there are two types of people — dogs and cats. A dog person opts for stability (e.g. family, work) while a cat person seeks the unknown. Contrary to popular proverb that “curiosity kills the cat,”  the poem contends that it is the lack of curiosity that kills us. For only the curious, “have, if they live, a tale worth telling at all.”

WHAT TO EAT in Korea, click HERE to read more

I survived Korea splendidly. But that was luck and, I would say 87%, attributed to meeting a lot of great people. For those who don’t like to leave having a good time to chance, there are a thing or two you should know about the city.

END_OF_DOCUMENT_TOKEN_TO_BE_REPLACED

Every year at Jindo, which is located in Korea’s Jeollanam-do Province, the ocean parts and reveals a 2.8 km (1.7 mi) path to an island in the middle of the ocean. I partook in the annual Sea Festival and the experience was, excuse my lack of better adjectives, totally wicked. It was surreal as my friends and I (armed with knee-high rain boots) made the crossing with water on both sides.

If you have any doubt that the narrow path you walked on was earlier submerged underwater, just looked around you and you will find plenty of proof. While the path looked like any regular post-heavy rain road, the path is scattered wit seaweeds and sea creatures. BTW, you can tell whom the locals were because they didn’t bother to walk to the island and chose to spend their time picking up kelps and sea delicacies like mussels and clams. 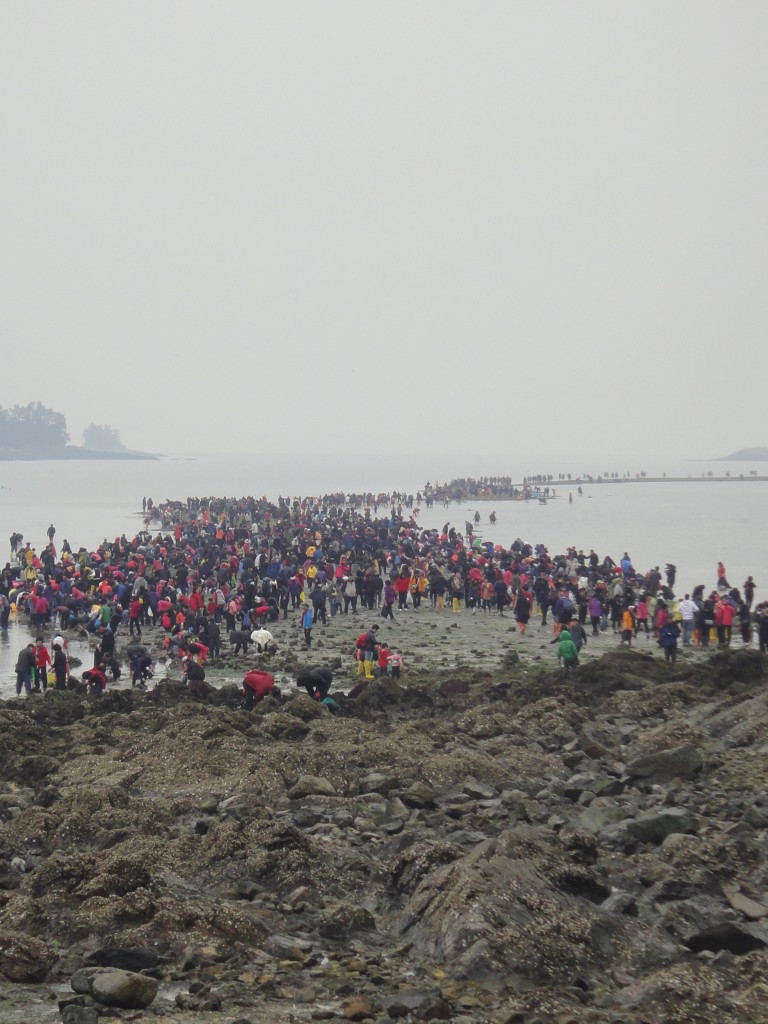 The ocean parts and reveals a path to a nearby island. (Apr. 2011, Jindo, Korea)

On the way back, the water rose quickly and I was shocked by the speed. The water level, which was at my heels when I initially made my way to the island, was well-over my knee-high rain boots on the way back. My friend and I walked quickly, but the tide caught up to us and at a point, the icy cold seawater came up to our thighs (brrr~). 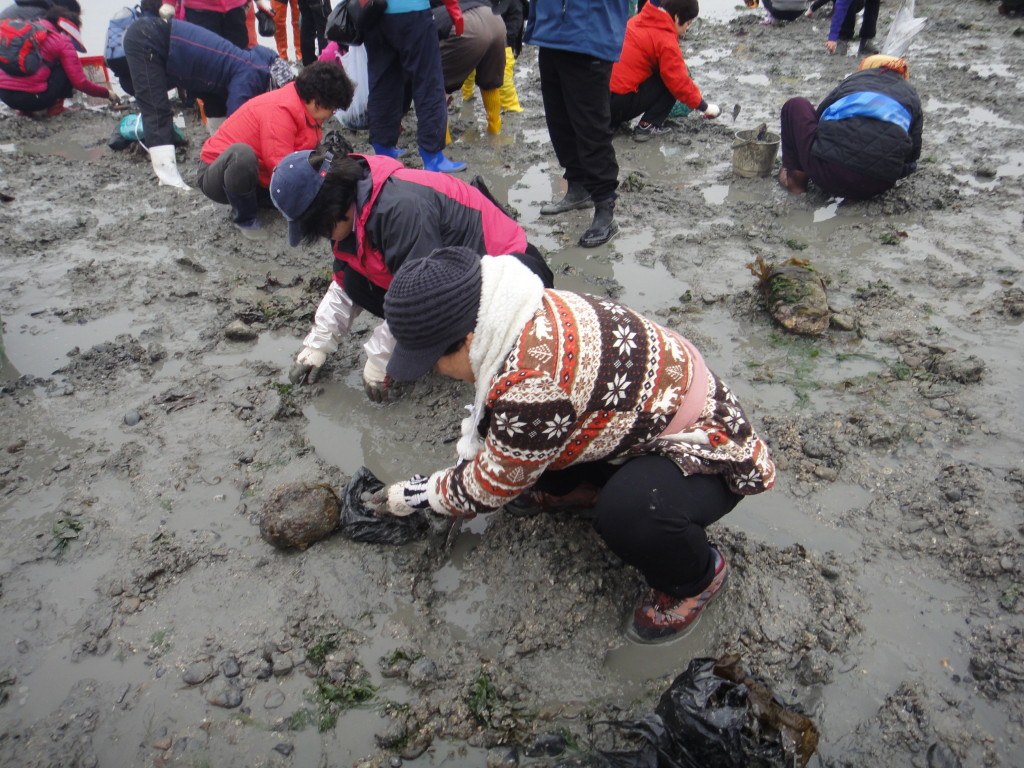 We made our way back to land and when we looked back, the island had disappeared. The ocean once again returned to its original form. It was as if the path was merely a mirage and the whole thing never happened. The water had removed everything. Considering this, perhaps rather than walking to and back from the island, I should have spent my time collecting kelps and clams (see images above of locals collecting foodstuffs). At the very least, I would have gotten a free meal out of the adventure.