Hysteria is a psychological condition that displays uncontrolled outbursts of emotion and behaviors. The term, for the majority of history, more than 4,000 years, was regarded as a sex-selective disorder, affecting only women.

What were some of the outdated theories behind “female” hysteria? There was the uterus theory, which claimed the female sex organ was to be blamed for female problems like anxiety, insomnia, depression, irritability and fainting.  There was also Sigmund Freud’s famous ‘Oedipal moment of recognition’ theory, which stated that women experienced hysteria because they were unable to reconcile the loss of their (metaphoric) penis.

With that introduction in mind, I’d like to share with you Hysteria (2011). The film, Official Selection for both Toronto and Tribeca Film Festival, looked at a time in history when female hysteria was a common medical diagnosis, and the prevalence of the condition also led to the creation of vibrators.

It was during the late 19th century and women with the following symptoms—nervousness, insomnia, depression, muscle spasms, and sexual frustrations—were said to suffer from hysteria. The long list of symptoms associated with hysteria meant that if a woman was anything other than docile, obedient and proper, she had hysteria. A popular treatment at the time was a vaginal massage, or “pelvic massage.”

Yes, the massage was exactly what you think it was. The problem with the treatment, although profitable, was that physicians were required to spend over hours performing vaginal massage before their patients could reach “hysterical paroxysm” (or what we now call “orgasm”). These sessions were long and physically exhausting. 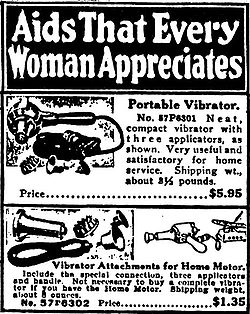 The medical diagnosis of hysteria officially ended in 1952 and hysteria was deleted from the official Diagnostic and Statistical Manual of Mental Disorders in 1980. Women could now embrace the joy of being loud, volatile, mercurial and even argumentative without the fear of being deemed hysterical.