Reading Margaret Atwood’s The Testaments takes me back to my high school AP Literature days when I first encountered her 1985 novel The Handmaid’s Tale. What was frightening then, a dystopian America where women are stripped of their rights and defined by their fertility (or lack of), continues to frame her 2019 sequel. While this time around Atwood appears to empower her Gileadean women—expanding her protagonists from one to three, giving the new protagonists names (Aunt Lydia, Agnes and Daisy/Nicole), and bestow on them the task of overturning Gilead—the new trio is no better than the Handmaid Offred (“Of [Commander] Fred”). The oft-forgotten male-narrated epilogue delivered by Professor Jame Darcy Pieixoto at the Gileadean Studies Symposium again hits home the fact that despite the effort of these women  to break free from Gilead, they ultimately fail to escape the male-imposed narrative. 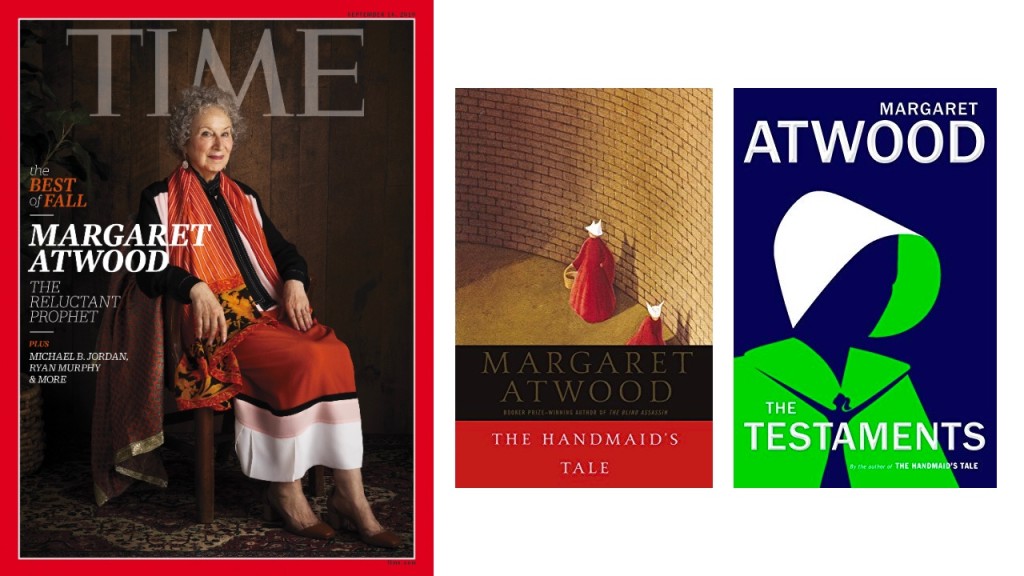 The Testaments is set 15 years after the events of The Handmaid’s Tale. It is narrated by Aunt Lydia, a character from the previous novel; Agnes, a young woman of the upper class living in Gilead; and Daisy, a young woman living in Canada.

Aunt Lydia, one of the original group of women handpicked by Commander Judd to become Aunts, an elite group of women tasked with creating laws and governing Gilead’s women, is the mastermind behind the plot to have Baby Nicole smuggle out scandalous information about Gilead elite. Baby Nicole, who was taken out of Gilead to Canada by her Handmaid mother when she was a baby, is the poster child for both Gilead and those against Gilead. Aunt Lydia arranges for Agnes (the adopted daughter of Commander Kyle and Tabitha; she is the daughter of a Handmaid, and also the sister of Baby Nicole) and Daisy, or Baby Nicole, to smuggle out the information. Agnes and Daisy/Nicole was able to escape to Canada. The leak to Canadian media leads to a purge that causes a military coup, which results in the collapse of Gilead and the restoration of the United States.

The Testaments, for the majority of the read, appears to be more uplifting than The Handmaid’s Tale. The three female protagonists, Aunt Lydia, Agnes and Daisy/Nicole, have more agency than Offred. These women are smart, brave, and totally kick-ass. After all, it’s not easy to topple a patriarchal regime where men reign supreme. But their story, which is female-narrated up to page 404, is undermined by the introduction of the male voice, that of Professor Pieixoto. Like the collection of tapes “attributed to the Gileadean Handmaid known as ‘Offred,'” Aunt Lydia’s story, found in the form handwritten pages titled The Ardua Hall Holograph, is subject to the “male review.”

Pieixoto’s talk makes up about 8 pages, less than 2% of the 415-page book, yet that male-narrated 2% is enough to erase the narrative of these amazing women. To start, he questions the validity of the manuscript and whether or not  Aunt Lydia is the author.  Aunt Lydia is referred to as “the ‘Lydia’ personage,” and her being that “someone” within Ardua Hall giving the two half-sister fugitives the crucial microdot to take to Canadian media, is postulated to be potentially authentic, but also a forgery or trap. Moreover, the entire mission, is only “thought to have been instrumental in initiating the final collapse of Gilead.”

It would not be fair to call Pieixoto a sexist, for he is only a historian piecing together a story. But he is still a male authoritarian voice.

Men rule Gilead and power is scarce for women, even for the best of all women like the Wives and the Aunts. The Wives are in the elite class as wives of commanders. They enjoy perks such as having domestic servants, or Marthas, to do their housework, but they are still entirely subjugated to men. And if they are infertile, they have to accept their husbands to have sex with Handmaids. The Aunts enjoy the rare privileges like having access to books, and the opportunity to learn to read and write. But even Aunt Lydia, who is the most powerful Aunts, is careful not to overreach. For example, when Commander Judd was assembling the original cohort of women to help him organize the womanly sphere to ensure “optimal amount of harmony, both civic and domestic, and the optimal number of offspring,” his response to Aunt Lydia’s request that the female sphere need to be completely controlled by women is:

“Within reason, and within budget. Subject, of course, to my final approval.”

The chilling statement echoes Atwood’s choice of having Pieixoto deliver his take on the discovered tapes (recorded by Offred) and manuscript (written by Aunt Lydia), which sounds something like:

“With evidence, and if true. Subject, of course, to my final approval.”