Between Monterey Bay and Carmel, I would go for the latter. While the Monterey Bay Aquarium showcases a spectacular jelly fish collection, Carmel, which is officially known as Carmel-by-the-Sea, beats the touristy attraction with its quaintness. The pretty town paints quite a picture.

A beloved brunch spot, La Bicyclette, boasts “rustic French fare” and is known for butternut squash pizza and flaky croissants. For me, I chose to start my morning with a cinnamon bun and latte. 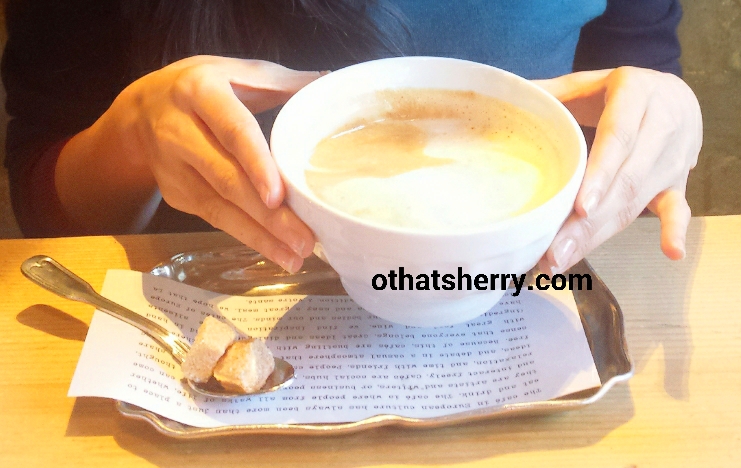 Instead of a cup of Joe, the latte at La Bicyclette is more like a “bowl” of Joe.

Well, the plenty large cup of Joe was served in a large ceramic bowl. (Read more about why coffee is called Joe).

On a sheet of printed paper, La Bicyclette explains that it is common for the French (apparently the rustic kind) to drink latte in a bowl. Furthermore, it hopes to carry on European coffee house tradition and establish itself as a place where the intelligentsia, such as philosophers, artists, poets, come and interact.

The café in European culture has always been more than just a place to eat and drink.

The café is where people from all walks of life, whether they are artists and writers, or business people and politicians, can come and interact freely.

I highly doubt Carmel, a sleepy seaside city, will ever be a business and political center. Nonetheless, I did experience first-handly the charm of European coffee houses when I studied in Vienna (2007).

In search of Old Vienna, I stumbled into Cafe Hawelka.

Viennese coffee culture dates back to 1683, from coffee beans left behind by the Turks during the Siege of Vienna. Viennese-style coffee houses today include all or some of the the following characteristics:

Vienna has always had a vibrant coffee house culture, but at the turn of the century (late 1800s), coffee houses were where intelligentsias gathered to have lively discussions. (image credit: Cafe Hawelka)

As for Cafe Hawelka, it stands as a cultural icon in a city with over 2,500 coffee houses. The cafe, which was opened by Leopold Hawelka in 1938, was closed a year later and later reopened in 1945.

Leopold died in 2011, when he was 100 years old. Family members took over the management but little was altered. Today, the cafe remained as it was generations ago, with tuxedoed waiters balancing trays of Viennese coffee, and a glass of water on the side, of course.

As for me, the cafe glowed warm, faded yellow, like a page tore out of memory from long time past. And of course, the pastry of the day (Aug. 27, 2007, a Monday to be exact) was plum cake.