Beijing and Shanghai are the top two largest cities in China and also the most recognized. But unlike Shanghai, which features stunning glass skyscrapers and glimmers metropolitan glamour, Beijing seems saturated with history, whispering stories of its bygone days. Wandering and getting lost in narrow hutongs (streets/alleys), one cannot help but romanticize that China’s capital city is like the faded pages of an old book or pictures edited with a vintage yellow-tone filter.

It seems. But in reality, the city is a booming metropolis that is constantly changing and evolving. Here are some of my personal artsy picks (or dare I say 文青 a.k.a. Hipster?). Read and find out how you can also enjoy mod Beijing, très hip! 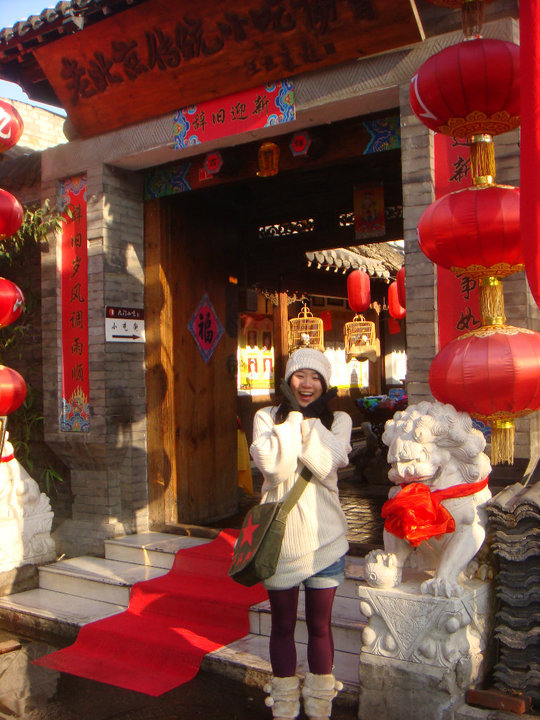 Red lanterns, Chinese guardian lions—are you thinking this is Old China? Well, sort of. This is a restaurant/IG othatsherry, taken 2012.

Located in Chaoyang District, 798 Art District is a thriving art community that is comparable to New York’s Greenwich Village or SoHo.

Originally a joint factory collaboration between the Soviet Union and the PRC, 798 was initially abandoned when the project never achieved its intended goal of stimulating an industrial boom. Today, the former factories are turned into galleries, shops and cafes. You will also find IG-worthy installation arts scattered throughout the area. 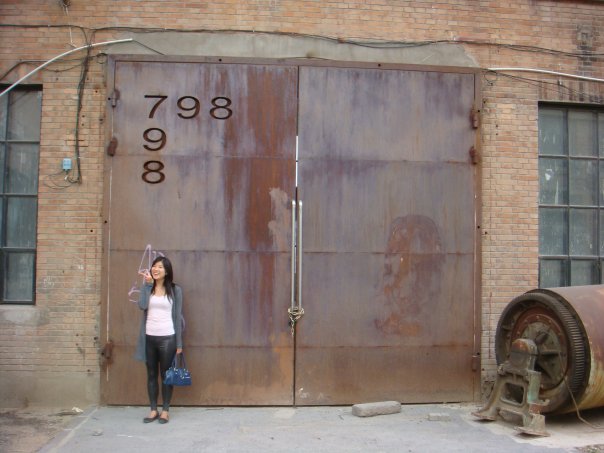 What’s a city without nightlife, and how can a night out be complete without a little alcohol to get the vibe started. Chinese drink baijiu (白酒), which translates into ‘white wine’. But don’t be fooled, baijiu contains 40-60% alcohol and tastes simply nasty! However, the younger generation has embraced Western pub culture and along Houhai, or the city’s “Back Sea,” you’ll find plenty of options.

Of the bars I visited, I was intrigued by the concept behind “Bed & Tapas”, also known as “Bed Bar” (床吧), quite intriguing. There are no chairs, the only place to sit, or rather lie, is on the kang (traditional concrete beds). Not a bad idea. Let us drink and “go to bed.” (p.s. the concrete beds were not very comfortable…)

Some of us are coffee-addicts who can’t function without our daily dose of caffeine. However, when in Rome, do as the Romans do; hence, when in Beijing, do as the Beijing-ners do: drink TEA!

Here at Liuxianguan Teahouse (the term Liuxian means get the talented, learned scholars to stay), it offers a Chinese tea ceremony experience that is equally beautiful and elaborate. as the Japanese tea ceremony.

Stepping into Red Capital Club (restaurant/bar), you will find yourself in an enchanting space. Constructed in traditional siheyuan style, the restaurant even has a miniature Souzhou garden. Beautiful, traditional… except, your server is a red guard?!?

That’s part of the fun! Dishes are named after famous Chinese leaders — emperors and Communist leaders. I strongly recommend ordering the Chairman’s favorite, hong shao rou (braised pork). It comes decorated with a statue of Mao carved out of taro. 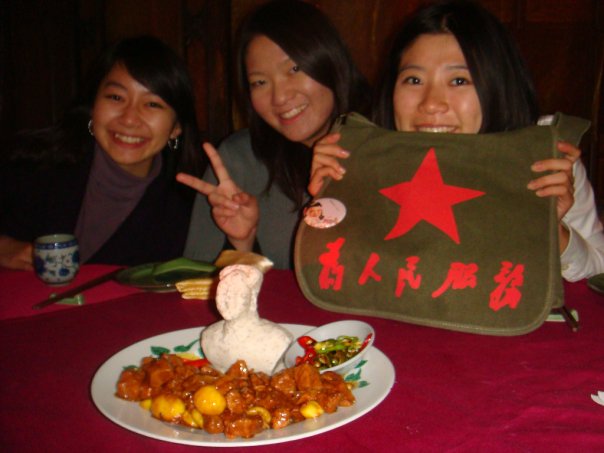 Dining with Mao at Red Capital Club! (p.s. What was I thinking when I decided that it was uber “campy” for me to carry a book bag that says “Serve the People”?