The story starts when Mary Poppins arrives at the Banks at Number Seventeen Cherry-Tree Lane with a grand entrance—blown over by the East Wind. Jane and Michael observe that the wind appears to “catch her up into the air and fling her at the house.” And Michael comments, ” ‘How funny! I’ve never seen that happen before.’ ”

Indeed, Mary Poppins is a most unusual nanny to Jane, Michael, and John and Barbara (the twins). She turns ordinary, everyday happenings extraordinary. Instead of sliding down the banister, she slides up. Instead of her employers (the Banks) determining her credentials, she evaluates the children to see if they will do. From the very beginning, Mary  Poppins topples the way how things should be done. Suspend your disbelief and prepare for what’s strange and wonderful. 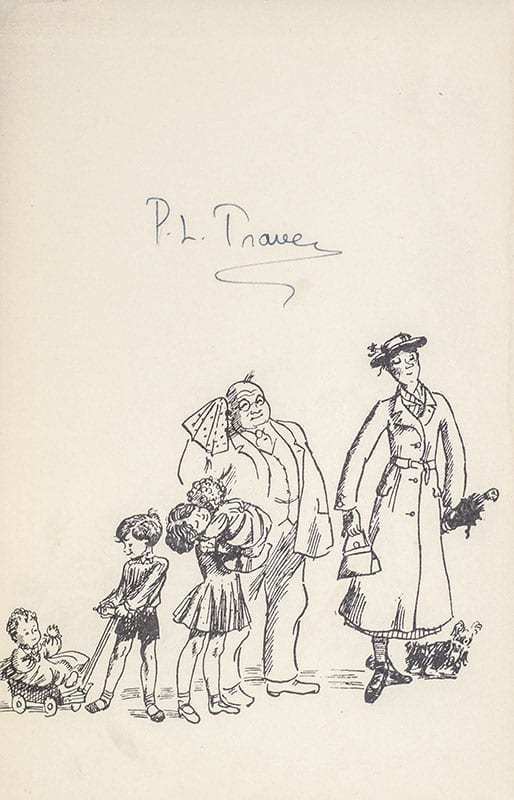 The great thing about the original Mary Poppins is that she is not just Miss-Perfect-Nanny. She is even more endearing because of her faults. For instance, she is very vain.

“Just look at you!” said Mary Poppins to herself, particularly noticing how nice her new gloves with the fur tops looked. They were the first pair she had ever had, and she thought she would never grow tired of looking at them in the shop windows with her hands inside them.

You can tell how much Mary Poppins adores her new gloves, and herself with the gloves even more. But while Mary Poppins likes to look her best, she is kind. She chooses to give away her new gloves after learning that Maia, one of the Seven Sisters (the Pleiades) coming to Earth to buy Christmas present for her family, did not buy anything for herself. You understand the magnitude of Mary Poppins’ act, and because of that, you forgive Mary Poppins’ haughty retort to Mrs. Banks’ inquiry about the whereabout of her gloves.

” ‘My gloves are my gloves and I do what I like with them,’ ” retorts Mary Poppins. And you love her even more because you know her heart is in a good place.

Read and let the original Mary Poppins, with her no-nonsense “spit-spot,” take you on an adventure.